How To Catch Better in Football

The bottom line is that being able to catch a ball is very important. Any position on the field should know how to catch properly. There are many drills that you can practice on the field or with a partner in your back yard. All you need is a football and someone to throw you a ball. Its a personal preference to use gloves or not. I would suggest using gloves only for games, this will help when you practice because you won't be tolerant to the gloves in a game.

This was always one of my favorite drills called the quick snatch. This drill requires a minimum of two people and a football. Decide who will throw the ball, and who will be catching the ball. Standing nearly ten yards apart have the catcher face away from the thrower. The catcher will stand facing away from the thrower waiting for his or her command. The thrower will tell the catcher when to turn around and catch the ball. This may take a few practice attempts to get the timing right but will increase your catching abilities. You can practice this drill over and over until desired.

Another drill is less complex than the one above. It will still require a minimum of two people to catch and throw the football. In this drill you will both face each other and throw the ball back and fourth. When its your turn to catch the ball, squeeze it firm when you first catch it keeping your hands in the same place. Hold for a count of one-one thousand, and then throw the ball back to your partner. Repeat until your desired amount has been reached.

I recommend to practice catching without football gloves. Only use gloves it a game to enhance your catching ability. When you don't use gloves in practice it makes it more challenging to catch the ball. 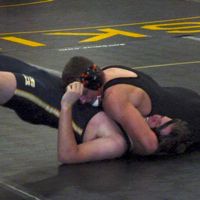 I played football since fourth grade. Catching can be a vital tool at nearly any position on the football field. If your a skilled position player such as a running back, receiver, quarterback, linebacker, or a defensive back you must be able to catch a ball.

Other Tips from Brennen

How to buy football socks

How to use a weight training sled

How to buy football girdle with built in pads

How To Bulk Up For Football

How to buy football gloves

How To Avoid Most Common Injuries in Football

How to buy ankle pads for football

How To Block in Football

How To Condition For Football

How to buy arm pads for football

How to buy football studs

How to walk on to a college football team

How to buy a football wristband playbook

How to buy football thigh pads

How To Run With a Football

How to Enter a High School Football Combine

How to Choose the Best Running Back Cleats

How To Score in Football

How to Establish a football player diet plan

How to buy football rib pads

How to buy a football blocking sled

How to buy football neck pads

How To Buy Football Bicep Pads

How To Catch a Football Properly