To start with, you are going to need 6-10 medicine balls if you are doing a team workout. There are so many brands of medicine balls, it does not really matter what you choose. Depending on the age of the players, that should affect what weight you choose for each ball.

The first part of the workout replicates the hitting motion. Have the players stand shoulder width apart in an athletic stance. Their shoulders should be facing their partner. They are first going to rotate their bodies away from their partner, then explode and swing the other way throwing the ball to the partner. The key for this throw is to remain in an athletic stance the whole time and keep your knees bent. After 5 throws facing this way, have the players flip 180 degrees and do 5 more throws from this side.

These next two workouts resemble each other a little bit. The first one, they players will face each other the whole time. The partner that has the ball will stand upright with the ball above his head. He will then reach the ball back behind his head and slightly arch his back, then throw the ball forward as hard as possible. When doing this throw, the goal is to throw it hard and straight versus throwing it high in the air. Have each partner do this throw 5 times.

The last throw focuses on throwing the ball with power and momentum. Each partner will be facing each other again. The player with the ball with hold the ball around his chest. He will then run towards his partner for a few steps and do a crow hop. Instead of a normal crow hop where the player throws a baseball with one arm, with the med balls the players throw the balls overhead with two hands. Just like the previous step, but instead they are gaining momentum with their legs and performing a crow hop. The key here is to gain as much ground as possible with the crow hop, and use all the momentum from your body. Have the players do this throw 5 times as well.

A few difficulties players will face is not staying in an athletic stance when necessary. Another issue is not using the entire body when throwing these med balls. If players try to only throw with their arms, they will get injuries easier. Make sure to use the whole body and follow through with the throws. As players get stronger and more advanced when throwing the med balls, then they can increase the number of times to throw the ball each workout. 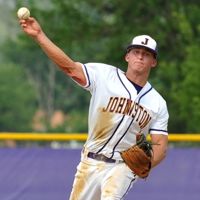 One time in high school when my team was doing a med ball workout, one of the balls exploded and broke when one of the players threw it against the wall too hard.

I first started using medicine balls for workouts during my junior year of high school for off-season baseball training. From that point on, we used them almost everyday we had baseball practice. Our new head coach at the time was a strong believer in med ball work, that is why we started using them regularly.