How to Keep Score in Volleyball

Familiarize yourself with the game of volleyball. Volleyball is no longer scored based on a side-out scoring system. It is now scored using rally scoring which, in short, means that your team does not need to be serving in order to score a point.

Assemble your scoreboard, preferable on a score table on the sideline.

Pay close attention to the game. When ever you hear a whistle ending the play, this typically means that a point has been scored. It is then up to you to give the correct team the point.

Any time a server, attacker, blocker, or digger puts the ball over to the other side of the net and it is not returned in 3 contacts, this is a point for the team that put the ball over the net.

If there is a net infraction where a player touches the top of the net during play, the opposing team is awarded a point.

If a server commits a foot-fault, the opposing team immediately receives a point.

Finally, if a ball is hit out of bounds or off of the antenna, the opposing team receives a point.

You really need to pay close attention and have some knowledge of the rules. The referee will serve as a good reference for you, as he/she will indicate which side is receiving the point after each play. Which ever side they point to after the play, that is the team that you should reward the point to. Good luck! 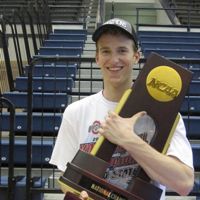 Scorekeeping can be very difficult, and I'll admit I wasn't always good at it. It takes concentration, but once you get the hang of it, it can become very easy.

Other Tips from Nick

How to Set a Volleyball

How To Become a Volleyball Coach

How To Do Volleyball Passing Drills

How To Tailgate for a College Football Game

How To Do Stretching for Volleyball

How To Do Volleyball Training Drills

How To Make a Resume

How to Block a Volleyball

How to Do Weight Training for Volleyball

How to Serve a Volleyball

How to Get Recruited to Play College Volleyball

How to Improve Your Volleyball Footwork

How to Jump Serve a Volleyball

How to Spike a Volleyball

How To Make a Volleyball Playbook

How To Be a Successful Business Man