How to Develop a Rugby Rucking Technique

To the untrained eye a ruck can sometimes look like a pile of bodies lawlessly running in to each other. The breakdown, however, has several governing rules.

First, let's understand what a ruck or "breakdown" is and how its formed. A ruck is formed when a tackle is made and members from both teams attempt to either keep or gain possession of the ball.

When the ball carrier is tackled he must release the ball. His body position on the ground determines how wide the breakdown is. Players must hit the ruck by coming though the gate, which is the width of the tackled players body. If a player doesn't come from directly behind the gate the ref will call a penalty "from the side".

If the tackler is able to get to his feet, release the tackled player, and get to an on sides position before the offense sends support, he is allowed to make a play on the ball. However, if an offensive player is present they will engage in a shoving match ideally using their shoulders. Once this shoving match is started the ref will call "ruck is formed" and any players involved in the ruck are not allowed to touch the ball with their hands. That's called "hands in" and its against the rules.

Players involved in the ruck are allowed to use their feet to strike the ball backwards. A team must push the opposing ruckers so that they are able to step completely over the ball, thus keeping or gaining possession.

The general rule of thumb in rucking is that the player with lower body position will win. When you're coming in to hit a ruck, defensively or offensively, start a few meters back so that you can run in through the gate with pace. When you're about a meter away from your opposition drop your body's level so that you can sweep the grass with your finger tips. Make sure your shoulders are lower than your oppositions so that your shoulder can make contact with their chest or gut. When contact is made explode upwards and through so that your opposition is blasted back at least a couple of meters.

If you aren't able to adjust your run in time to hit a ruck with low body position, or if the opposition is laying on the ruck making it hard to get lower than them there are other techniques that can be used. If they are just sort of laying on the ruck and their ribs are exposed try to turn your body so that your shoulder hits them in the side and they are knocked off the breakdown. Or if the are using their hands to hold themselves up wrap your arms around their midriff and roll them off. This technique is called the gator roll.

Don't forget that a player must be on their feet while driving through a ruck. If you fall forward or jump through you will be called for "diving over" and receive a penalty. So keep your feet chopping until you've pushed that opposing player away from the breakdown. Also, by all means, protect the ball. A good ruck does a team no good if the rucking player kicks the ball away from the protection of the breakdown. 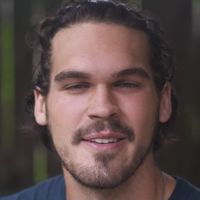 I once got to see the New Zealand All Blacks play Ireland in a preseason exhibition match. Very early in the first half Ireland's 8 man received a red card for kneeing All Blacks captain Richie McCaw in the face. Rugby can be a vicious game and rucks can be brutal.

As a second row for Ohio State I've hit a lot of rucks. OSU, and most rugby teams, usually count on the tight five to handle a lot of the heavy rucking. Playing with OSU for the past 5 years has taught when to hit rucks and how to hit rucks effectively.

Other Tips from Danny

How To Do Stretching For Rugby

How to Do a Rugby Switch Pass

How to Do a Rugby Leg Workout

How to Develop a Rugby Goal Kicking Technique

How to Do a Rugby Forward Workout

How To Choose The Best Skateboarding Brands

How to Get Better at Rugby

How to Choose Rugby Shoulder Pads

How to Avoid The Most Common Injuries in Rugby

How to Develop a Rugby Passing Technique

How To Become a Rugby Coach

How to Get Fit for Rugby

How to Do a Rugby Prop Workout

How to Do a Rugby Offseason Workout

How to Develop a Rugby Spin Pass Technique

How to Play Rugby Number 8

How to Choose Rugby Cleats